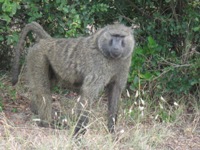 Baboons belong to the group of Old World monkeys. They are found in North-Central and Eastern Africa. They inhabit open grassland near wooded areas. They are also found in moist evergreen forests and near areas of human habitation. Five species of baboons have been described: P.hamadryas, P.papio, P.anubis, P.cyanocephalus and P.ursinus. They have a lifespan of 25 – 30 years in the wild and can live for approximately 40 – 45 years in captivity. The main species housed at the Institute of Primate Research is P.anubis(Olive baboon). These have a greenish grey hair coat cover as adults while the infants have a black coat. Unlike other baboons, they have long pointed muzzles, close-set eyes, powerful jaws, thick fur except on their muzzle, a short tail and rough spots on their protruding hindquarters. The males weigh approximately 24 kg while the females weigh approximately 14.7 kg. The adult males have long hair forming a mane from the top of their heads through their shoulders, gradually shortening down the back.   Olive baboons are omnivores and consume a huge variety of feed including roots, tubers, corms, fruits, leaves, flowers, birds, birds’ eggs and vertebrates (including other primates). The use of non-human primates such as baboons is especially critical given their structural and physiological homology with humans. Studies previously carried out in baboons have led to major breakthroughs in the development of curative and prophylactic products to enhance disease control.   Baboons are thus used as experimental models for the safety, feasibility and efficacy of these products. Baboons are therefore especially to the following disciplines in IPR, Reproductive health and biology, Neuroscience (Alzheimer’s disease), Infectious diseases (Schistosomiasis and malaria).

Habitat: Clobus live in all types of closed forests including Montane and Gallery forests. They may be found both in coastal forests and inland high-country areas. Bamboo stands are also common dwelling places of the Colobus.

Physical features: Colobus monkeys do not have thumbs. Their black fur contrasts with their long white mantle, beard and whiskers around the face, They also have a long white tail. The eastern black and white is distinguishable by U-shaped cape of white hair running from the shoulders to lower back., whereas the Angolan black and white has white hairs flaring out only on the shoulders.

Behavioural characteristics: The black and white Colobus is the most arboreal of all African monkeys and rarely descends to the ground. They use their mantle hair and tail as parachutes during long leaps. Colobus monkeys live in troops of about 5-10 animals consisting of a dominant male, several females and their young. Colobus monkeys do not have a distinct breeding period although most mating occurs during the rainy season. They are strict leaf-eaters and prefer tender young leaves found in treetops. Their complex stomachs enable them to digest mature or toxic foliage that other monkeys cannot.

Interesting facts: The name Colobus is a Greek derivative meaning ‘mutilated one ‘, this is due to the absence of thumbs. They communicate via song-like calls, a warning call and a mating call. 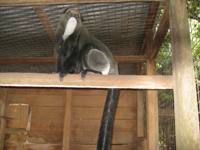 Physical features: They have a grey-green coloring that provides camouflage from predators such as leopards, pythons and Eagles. Adults are nearly Identical in appearance, each having a distinctive white lip, whiskers and long beard, and an orange-red crescent-shaped patch on the brow. They have a white rump and thigh strip. Males are have a bright blue scrotum and are noticeably larger than females both in height and weight.

Behavioural characteristics: DeBrazzas are diurnal, spending majority of their time low in the forest canopy or on the forest floor. 75 %of their diet consists mainly of fruits and seeds. They also feed on leaves , mushrooms, flowers and small animals such as reptiles and arthropods. Foraging normally takes place between dawn and dusk ,they have cheek pouches where they store food as they forage in exposed areas. Only later, when they are in a safe area do they take time to eat their food. Troops usually consist of one dominant male, one or more females and their young . A troop can number upto 35 individuals but are usually between 10-15.

Interesting facts: The French word guenon means “fright” and refers to the facial expressions the animal uses to threaten or when anxious. Debrazza’s guenons are excellent swimmers. They ‘freeze’ when attacked and can stay immobile for up to 8 hours. 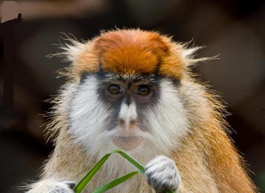 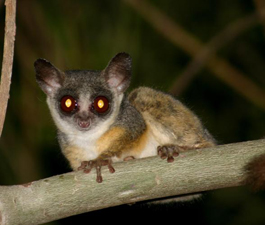 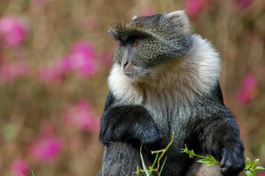 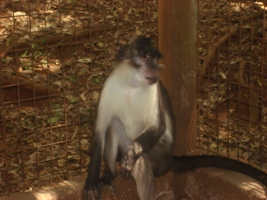 Habitat: Mangabeys live in a wide variety of habitats ranging from riverine forest patches as is the case with the Tana River Mangabey, sub-tropical or dry forests (Black-crested Mangabey) to swamps or primary forests ( Gray-cheeked Mangabey).

Range: Mangabeys range from Burkina Faso, Ghana, Guinea, Liberia, Nigeria and Sierra Leone in West Africa to Kenya, Uganda and Tanzania in East Africa. They are also found in Congo, DRC and Gabon in Central Africa.

Physical features: These differ from species to species, for example the Crested Mangabeys have dark skin, eyelids that match their facial skin and crests of hair on their heads. The Grey-cheeked Mangabey and Uganda Mangabey have thick brown fur and look similar in shape to small hairy baboons. The Kipunji has long brown fur which stands in tufts on the sides and top of its head while its face and eyelids are uniformly black. The male Mangabeys are slightly larger than the females.

Behavioural characteristics: Mangabeys are mainly arboreal but may be found habitually on the forest floor foraging for food. They feed primarily on fruits as well as shoots, flowers and insects. Mangabeys live in troops of between 5 and 30 usually consisting of 1 dominant male, several females and their young or several males( none dominant), females and their young. On reaching adulthood young males leave the troop and join other troops while females remain in the troop of their birth. 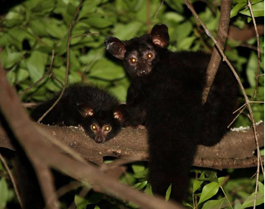 Somali lesser galago Galago gallarum .Small (200 g) arboreal, nocturnal primate of the Commiphora and acacia bushlands of eastern and north-eastern Kenya. Present in dryer habitats than any other primate in Africa. 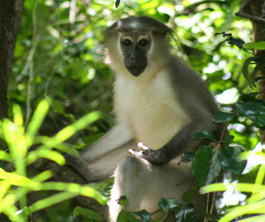 Tana River mangabey Cercocebus galeritus. Medium-sized, semi-terrestrial, primate that is found only in the forests of the lower Tana River. The main threats are habitat loss due to agricultural clearing, extraction of forest products, and five hydroelectric power dams upriver. Listed as one of the world’s 25 most threatened primates. Less than 1,200 remain in the world. Red List status: ‘Endangered’. 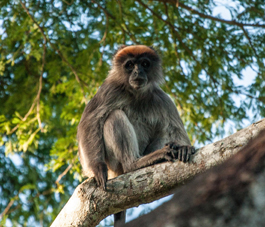 Tana River red colobus Procolobus rufomitratus rufomitratus .Medium-sized (10 kg) arboreal primate. Found only in the forests of the lower Tana River. The main threats are habitat loss due to clearing for agriculture, extraction of forest products, and five hydroelectric power dams upriver. Listed as one of the world’s 25 most threatened primates. Less than 1,000 remaining in the world. Red List status: ‘Endangered’.

Their weights range from 4 -7 kg and 2.5 – 3.5 kg for males and females respectively. Infants have pink faces and a lighter colouration than adults. It is said there are 21 subspecies, with Kenyan subspecies C.a.pygerythrus (Amboseli and Coastal region), C.a.arenarius (Samburu and Northern regions) and C.a.tantalus (Western region).

For simplicity, all vervets are considered to be part of the C.aethiops species. The vervet is found in savannah, woodland, riverine, gallery, lakeshore, and coastal forests. They compete with baboons as the most widely distributed of all the African monkeys and the most abundant monkey in the world. Like the baboons, Vervets are opportunistic eaters, which allow them to survive on a wide variety of conditions by eating various food types.

They are truly omnivorous, eating fruits, buds, seeds, roots, bark, flowers, gum, insects, small vertebrates and eggs. They will travel for 1-2km daily. Vervets are found in multi-male multi-female groups with linear dominance hierarchy among males and matriarchal kin group relationships among the females. Sexual consortships are not formed and there is no paternal care of offspring after birth.

The vervet monkey is a preferred lab animal for studies in Human African Trypanosomiasis and leishmaniasis.